The search for George McGonagle: Quest for bobblehead leads Canadian collector to Bluefield 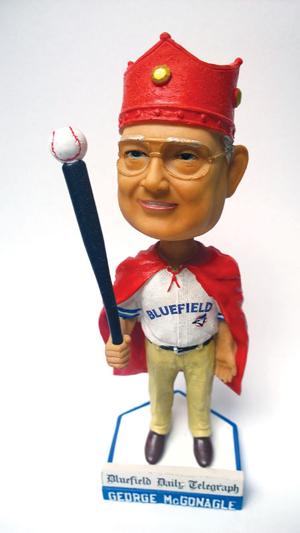 BLUEFIELD — Trying to find an elusive treasure is a challenge for any dedicated collector. Being scarce and unique, the very qualities that make an item desirable, also make it harder to find. That search for one special figure recently led a Canadian baseball bobbleheads collector to Bluefield, W.Va. and the Bluefield Daily Telegraph.

“I’ve only been doing this for four years, and it all started when I went to a Toronto Blue Jays game and it was a bobbleheads giveaway day,” McLeod recalled. “That day it was the Roy Halladay bobblehead.”

This ignited a passion in McLeod, who describes himself as a sports enthusiast. He soon had enough bobbleheads to start several baseball teams.

“I have 235 pieces and growing weekly,” he said. “I collect all retail and stadium giveaways of the teams’ bobbleheads, figures and mini stadiums for the Toronto Blue Jays and their affiliate minor league teams.”

McLeod said the Toronto Blue Jays have told him that based on current knowledge, he has the largest Blue Jays bobblehead and figure collection. To save on shipping to Canada, he keeps a post office box in Buffalo, NY. It’s not unusual for him to pick up 20 packages at a time.

However, McLeod was having a hard time tracking down one especially elusive bobblehead, the one of Bluefield Baseball Club President George McGonagle.

On Dec. 6 2012, McGonagle was named the “2012 King of Baseball” at Baseball’s Winter Meeting in Nashville, Tenn. On Aug. 19, 2013, this honor was recognized when fans were offered George McGonagle bobbleheads wearing a crown and cape. A bat topped with a baseball is his royal scepter.

McLeod started his quest for a George McGonagle bobblehead in 2013 and soon learned getting one wouldn’t be easy. Searches on eBay and other web sites offered no leads, but then he saw a Bluefield Daily Telegraph sponsor plate on the Bluefield Blue Jays Facebook page and gave it a try. He was soon talking to Editor Samantha Perry.

Did she know where a George McGonagle bobblehead? She knew where one might be found – there was one in her office. She started asking around the newspaper to see if a King George bobblehead still in its box was on hand. Perry then started asking people she knew whether any of the bobbleheads were still available. Blue Jays General Manager Jeff Gray told her that he would look for one. About two weeks later, Perry arrived for work and found the boxed bobblehead with a note on it waiting on her desk. Gray had asked Daily Telegraph sportswriter and cartoonist Tom Bone to deliver it.

After Perry had the bobblehead packed securely and filled out the forms that would get it through customs to Canada, it was on its way to McLeod. The scheduled arrival date was July 15.

“This has been the hardest one to track down,” he said.

Bobbleheads like the George McGonagle piece are usually made in lots of 500. Finding one from “a fairly small town and a fairly small team is quite difficult,” McLeod stated. The numbers of bobbleheads available to collectors drops even more when small children are involved.

“They’re even rarer when little kids get hold of them and they’re broken by the second inning,” McLeod said.

McLeod hopes to one day donate his collection to the Toronto Blue Jays and see it go on display at the Rogers Center in Toronto. Another goal is to write an illustrated book telling the story behind each bobblehead in the collection. Meanwhile, another sports collection continues to grow.

“I also collect NASCAR diecast cars. I easily have 300 of those,”  McLeod said. “And I always get them autographed by the drivers...I’m pretty much a big sports junky and that’s it.”