From PadresPublic.com by RJs Fro

It’s the same line I hear from every single Padres employee that has come through the doors in the past few seasons: “Bobbleheads don’t do well in San Diego.”

And it’s not like it’s worded even remotely different either. It’s verbatim. Word for word. Exactamundo. Twinsies. Well, you get the point. It’s as if upon their hiring they are forced to watch a movie that brainwashes everything that they previously thought was right. Brown = Evil. Bobbleheads=don’t do well in San Diego. I first heard that phrase uttered from an employee back in 2009 and have heard it more times than I can count since.

Word is spreading that there will be no bobblehead next year, but as we saw last year that could quickly change. And by quickly I mean 3 months into the season. I chatted with AJM last night about this topic. He wrote a great piece this morning about how his young daughter is a Chase Headley fan BECAUSE of the bobblehead. The AJM daughters are also very fond of Everth Cabrera (which they have a bobblehead of). Notice a trend here? They see that little bobblehead on their shelf every morning and start to get interested in that player.

This is kind of a .400 in ’94/RJ’s Fro co-posting. Perhaps I should drink a beer and film myself while writing, so I can make it a Padres and Pints post too? Nah, it’s too early for that.

Let’s take a look at all the bobblehead giveaways in Padres history and see how the attendance figures stack up. Keep in mind there are many things that factor into attendance (opponents, day of the week, month, pitching matchups, win/loss record, etc) but just for the sake of this post I won’t go that in depth.
The first bobblehead giveaway was in 2001. 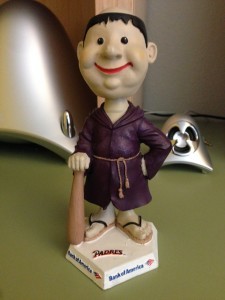 It’s a pretty decent bobblehead but it was given away on a Sunday (the only one ever) and was just given away to only kids. It’s kind of hard to factor this in to the overall equation under those conditions. It drew 27,401 which is 1,959 under the season average of 29,360. It was the #33 ranked home game of the year.

In 2003 they gave away 3 different bobbleheads. 2003 was a magical year….for promotions. The team was god awful, but the giveaways were killer! 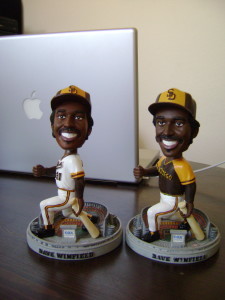 “They had the Home uniform and the Away uniform, with both having him standing inside San Diego Stadium (AKA: Jack Murphy, AKA: Qualcomm). The likeness is pretty decent and the sideburns are amazing. The Home was the standard version given out and the Away version had a limited number of 3,100 (Winfield was #31). As an added bonus, 31 of the bobbleheads were autographed by Dave Winfield himself.” 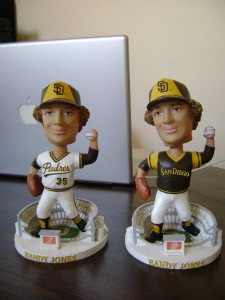 “The Home was once again the standard version, and the Away had a limited number of 3,500 (RJ was #35). There were also 35 autographed by Randy Jones given out at random. Same story as the Winfield one, awesome promotion all around.”

“As a last minute add (not on the original promotional schedule), the Padres gave away a Chicken Bobblehead, er I mean body, on September 26th. I say that it is a bobble “body” because the Chicken’s whole body moves as opposed to just his head. It’s actually very fitting for a Chicken figure because it looks like he’s dancing. The likeness is spot on too. They gave it away to commemorate his triumphant return to the Q and the Padres even won the game.” 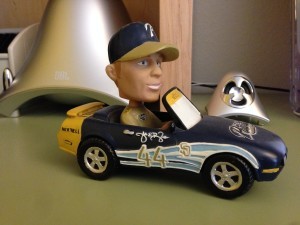 “It has a button on the back that once pushed makes Jake start singing a lovely rendition of the “Go Cubs Go” song……either that or the sound of an engine revving up, I really can’t remember.”

It’s an awful bobblehead. Bad idea. Bad execution. Just bad. It drew 32,585 which was 2,844 under the season average of 35,429. It was the #58 most attended game that year. The 63-65 Padres were facing the 51-78 Rockies. The starting pitching matchup consisted of two pitchers (Brian Lawrence and Sun-Woo Kim) with ERA’s creeping up on 5.00. The Rockies never draw well in San Diego. August doesn’t draw. There were so many things going against this giveaway it’s not even funny. 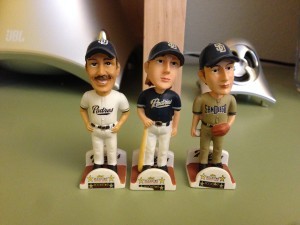 What I said back then:

“I just shudder to think that the last 2 bobblehead giveaways were a tri-fecta of magnetized mini bobbleheads & a baseball player in a NASCAR car.”

Not as bad as the previous Peavy one, but the mini magenetic idea wasn’t a good one. It still drew 35,196 which was 2,359 over the season average of 32,837. It ranked #31 on the season and is the second Friday bobblehead giveaway ever. 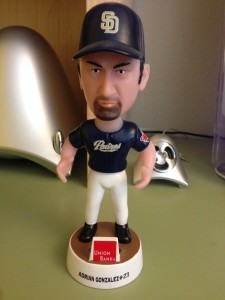 I like to refer to this one as Rubber Ducky Adrian. His face looks like a duck and it’s made out of a plastic that is very similar to a rubber ducky. Oddly, this is the only one I don’t have a giveaway date on so if you know let me know in the comments.

In 2010 the Padres gave away 5 bobbleheads. The player selections were odd at the time, considering Adrian Gonzalez and Heath Bell were on the team still, but overall they are decent bobbleheads. This post is getting long so I’ll just give the attendance figures. 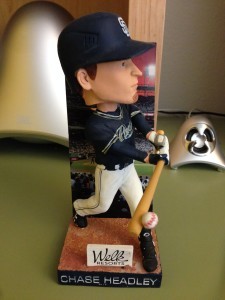 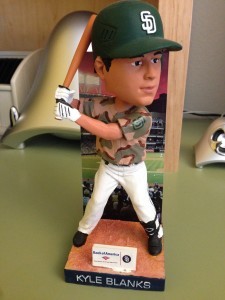 You push all the bobbleheads together and you get a cool background setting of Petco Park. It’s been done (better) before, but I like the idea they were shooting for. 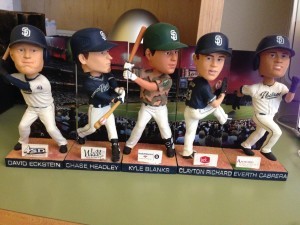 After having 4 of the 5 bobbleheads draw over the season average in 2010 you’d think they would take notice, right? Instead they release the schedule with only 1 bobblehead and it wasn’t even a player. A mid-season addition to the promotional schedule would also finally give the fans their first Tony bobblehead. Not that one though. 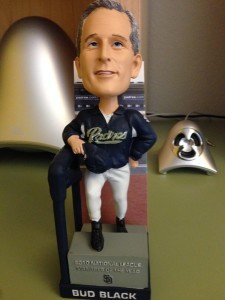 This one drew 26,065 which is 392 under the season average of 26,457. It ranked #35 on the season. This one was announced exactly 3 weeks before the giveaway. Cool idea and the bobblehead is pretty solid. A catch here is that only the first 5,000 fans received one of these so it’s hard to factor that in as well.

2012 was bobblehead-less. In 2013 there were rumblings that bobbleheads would return though. Who could it be? Would Tony Gwynn, Trevor Hoffman or Jerry Coleman finally get their due? Nope. Chase Headley gets his second in 4 seasons. It also made my list of terrible moments in Padres promotions history earlier this year.

So of the 15 bobbleheads given away at Padres games since 2001 only 4 have failed to draw the season average and 3 of the 4 had catches. But still, 11 of the 15 giveaways have gone over the season average. If you are reading this, Padres employees, I don’t want to hear that bobbleheads don’t do well in San Diego, because they do indeed do well. Even for sub-par bobbleheads (look at the Dodgers, Giants, A’s, hell any other team actually for better ones) the fans still come. It’s a travesty that 3 Padres legends and even Steve Garvey whose number 6 sits on the batters eye here, have NEVER had a bobblehead in the 12 seasons you have been giving them away. Quit making false excuses and make it happen in 2014.