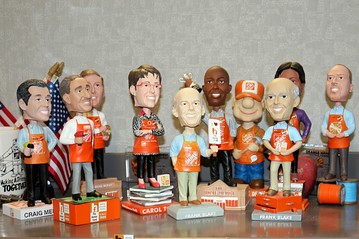 The Next Big Question For Home Depot: What Happens To The Frank Blake Bobblehead

Now that Frank Blake has announced his retirement as chief executive of Home Depot, one question that will need to be answered is whether his Bobblehead, usually priced at $9.95, will go on sale, or whether its price will surge as it becomes a collector’s item.

The do it yourself retailer began making Bobbleheads of its top executives in 2007 and sells them at its corporate headquarters and online at prices ranging from $4.95 (for CFO Carol Tome) to $14.95 (for Home Depot’s mascot, Homer). The do it yourself chain also sells them at its annual store manager’s meeting, where Mr. Blake is known to autograph his figurine’s head for employees.

That doesn’t really compare with the $49.95 you would have to pay for a LeBron James holding his NBA MVP trophy, but they are popular at the company’s Atlanta headquarters, where they can be found on many employees’ desks.

The home improvement retailer sells them to raise money for the Homer Fund, the company’s charity that provides financial assistance to Home Depot employees who are unable to pay for basic living expenses as a direct result of unforeseen circumstances such as a death, natural disaster, fire or injury. Since 1999, thousands of employees have received more than $66 million, according to the fund’s website.

Some Home Depot Bobbleheads have even made it onto the secondary market, showing up in places like eBay. The listing, which charged $10 plus $8 for shipping, expired in May.