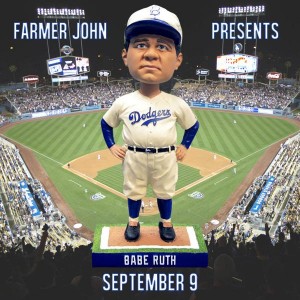 On Sept. 9, the Los Angeles Dodgers will distribute bobbleheads celebrating Babe Ruth even though Babe Ruth never played a game for the Dodgers franchise.

Ruth did serve as the Brooklyn Dodgers’ first-base coach in 1938, but according to biographer Robert Creamer, he didn’t even relay signs. He was basically just hired to stand there and be Babe Ruth, and probably at most to yell, “Back!” on pickoff attempts.

But the franchise has an incredible history that includes affiliations with scores of Hall of Famers and colorful personalities in nearly every facet of the game, enough so that they certainly don’t have to resort to honoring a guy who spent one season as their first-base coach as something of a promotional stunt.

Then again, here I am writing about it. So maybe the joke’s on me. I see you, Dodgers.

Seriously, though. C’mon. Even a Walter O’Malley bobblehead would probably go over better with fans nostalgic for the Brooklyn team.