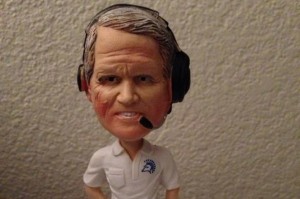 One of the more notable San Jose State alumni is 49ers legend Bill Walsh. Naturally, this means SJSU needs to create a bobblehead.

The San Jose State Spartans have announced plans to give away Bill Walsh bobbleheads to season ticket holders. For those not aware, Bill Walsh played tight end and defensive end for the Spartans, graduating in 1955. Walsh served as a grad assistant at San Jose State, but that is the extent of his coaching.

As you can see from the picture above, they went with the coaching look for Bill Walsh. They could have gone for the player version, but as Jimmy Durkin pointed out, Coach Walsh is slightly more recognizable as a coach. Nonetheless, it cracks me up that San Jose State is promoting Coach Walsh, even though he was just a grad assistant. I don't blame them, but it does not make it any less funny.

The school sent along a voucher to season ticket holders that entitles them to a bobblehead. You apparently turn in the voucher at the season opener. They are also advertising a 4-pack that includes 4 reserved season tickets and 4 Bill Walsh bobbleheads for $299.

If you REALLY want to get one of these bobbleheads, it would appear you can get a season ticket deal for $72.50 at oneburghdeals.com. If you're a Spartans fan, that would appear to be a pretty solid deal.