From BallparkDigest.com by Zach Spedden

All across Major League Baseball this season, bobbleheads and garden gnomes will be utilized as giveaways to attract fans to the ballpark. This week in Promotions Watch, we look at the wide range of those items on the docket, ranging from bobbleheads that celebrate memorable moments to gnomes of players and managers.

Bobbleheads have long had their place on baseball promotional schedules, proving to be a popular item for fans of all ages. One theme that is evident across the league this year is their use in commemorating historical moments, both for bygone eras as well the happenings of more recent memory.

The Washington Nationals, for instance, will honor both of Max Scherzer’s no-hitters from last season with bobbleheads on two separate dates. The first will be handed out at Nationals Park on May 23, with the Nationals’ contest on August 26 marking the conclusion of the series.

As they look to defend their championship, the Kansas City Royals will take a few days to recap their memorable run to last year’s World Series title. A big part of this promotional slate is the Postseason Bobblehead series, which begins with manager Ned Yost on May 14 and concludes with Salvador Perez on September 3.

Throughout the season, the Miami Marlins will recognize various All-Star seasons from past players. Charles Johnson’s 1997 campaign will be honored on April 16, kicking off a series that will include former Florida Marlins such as Jeff Conine, Moises Alou, Gary Sheffield, and many more.

Ken Griffey Jr. will be the first representative of the Seattle Mariners in the Hall of Fame, and the Mariners are celebrating the occasion with a weekend of promotions. That slate begins with a bobblehead giveaway on August 5, followed over the next two days with a number retirement ceremony, replica Hall of Fame plaque giveaway, and a replica jersey. Griffey’s induction will also be recognized by the Cincinnati Reds—the team for which he played from 2000 until July 2008—with a dual bobblehead on May 21. The bobblehead will depict him as both a Red and a Mariner. 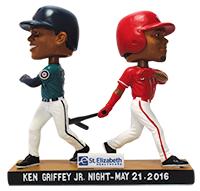 For the 35th anniversary of their 1981 title, the Los Angeles Dodgers will celebrate with a trio bobblehead on July 2. The bobblehead will feature Ron Cey, Steve Yeager, and Pedro Guerrero, the three players who split the 1981 World Series MVP award. That giveaway will be part of a busy day at Dodger Stadium, as it will coincide with an Old-Timers Game.

In a twist, the St. Louis Cardinals will remember a figure from the St. Louis Browns with an Eddie Gaedel bobblehead on September 9. Sporting the number 1/8, Gaedel was recruited by Browns owner Bill Veck to appear in a game in 1951 and drew a walk in his only trip to the plate. The Cardinals will, of course, honor their own past and present through bobbleheads, with giveaways scheduled for the likes of Adam Wainwright, Trevor Rosenthal, Matt Holliday, David Eckstein, and more.

The New York Yankees are honoring some of their best players—including Babe Ruth and Mickey Mantle—with bobbleheads, but one giveaway will be timed particularly well. On October 1, the Yankees will hand out Roger Maris bobbleheads. That date is the 55th anniversary of when Maris hit his 61st home run of 1961, breaking the single-season record that was previously held by Ruth.

In some instances, the bobbleheads will come with a twist, focusing instead on theme nights. The Chicago White Sox, Colorado Rockies, and Tampa Bay Rays all have Star Wars-inspired bobbleheads on their schedules. The White Sox will have their mascot Southpaw in a Star Wars bobblehead on August 27, while the Rockies and Rays will feature players Charlie Blackmon and Chris Archer on July 23 and June 11, respectively.

As an alternative to bobbleheads, many teams will hand out gnomes. Last year was a particularly big year for teams using the items as tributes to managers, and the San Francisco Giants will carry that trend into this season by handing out Bruce Bochy gnomes on July 31.

One thing that is more evident this season, as opposed to last, is gnomes that depict players, with a few teams taking creative approaches. The Rays will give out Evan Longoria Longo Solar gnomes on August 6. The Oakland A’s will take it a step further on April 30 with a Sean Doolittle Metalica Gnome, which will be equipped with sound. Doolitle’s walkout song when he enters games from the bullpen is “For Whom the Bell Tolls,” and the gnome will play a portion of the tune at the push of a button.

The Pittsburgh Pirates will have a gnome giveaway featuring Josh Harrison on April 17. This item will be given to fans 14 and younger as part of Kids Day at PNC Park.

Two of baseball’s youngest stars will be featured in gnome form this season. After his work in the starting rotation helped lead the club to a National League Pennant, the New York Mets will honor Noah Syndergaard with a Syndergaard-en Gnome on April 30. The Baltimore Orioles, meanwhile, will give out gnomes of All-Star third baseman Manny Machado on July 9.

Fans of the Cardinals can expect a Yadier Molina gnome at Busch Stadium on May 30. It should also be noted that the Springfield Cardinals (Class AA; Texas League) will hand out the exact same gnome on June 9 as part of their Busch Stadium Exclusives series.

Two final gnomes to note come courtesy of the Boston Red Sox. On May 15, the team will hand out a gnome that features its mascot Wally. What might attract more interest, however, is the Red Sox’s Papi Gnome on June 21. That giveaway is a nod to David Ortiz, who is set to retire after this season.

These giveaways make for a creative slate, showing that even major league teams will undertake unique promotions to attract fans to the ballpark.