The National Bobblehead Hall of Fame and Museum (www.BobbleheadHall.com) launched a Kickstarter to produce bobbleheads earlier this year of Roxanne Chalifoux, the Villanova band piccolo player who became an online sensation after a TV camera captured her crying over the Wildcats’ loss in the March NCAA Tournament.

That Kickstarter campaign has reached its goal, according to Phil Sklar, co-founder and CEO of the National Bobblehead Fall of Fame and Museum.

The bobbleheads depict Roxanne as she appeared on TV, crying while playing the piccolo in her Villanova jersey.

"Like millions of Americans, I have always been captivated by the NCAA Tournament, and this was one of the most memorable moments this year. It highlights all of the emotions on and off the court and symbolizes that agony of defeat,” said Phil Sklar, Co-Founder and CEO of the National Bobblehead Hall of Fame and Museum. “After the tournament ended, we realized that a bobblehead would be the perfect way to capture this unique moment forever.” 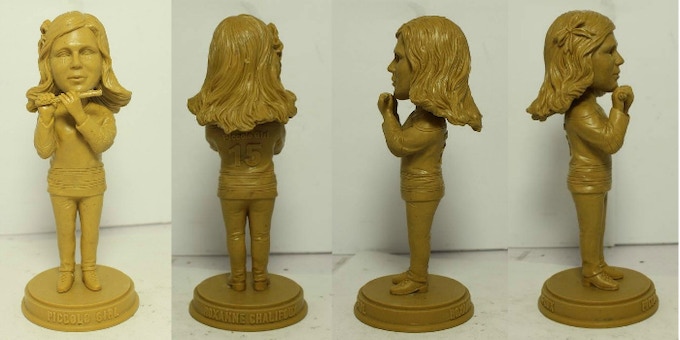 The Kickstarter seeks to raise $5,000, a portion of which will go to Roxanne and the Villanova University Band. Contributors to the campaign will receive the bobblehead and other unique rewards, but it is unlikely that the bobblehead will be produced in larger quantities if the Kickstarter goal isn’t met.

"This will be a great memento for current students, alumni, faculty, administrators, basketball fans and collectors,” said National Bobblehead Hall of Fame and Museum Co-Founder and President, Brad Novak. “Bobbleheads are very popular and we encourage people to back the Kickstarter to ensure you don’t miss out on this very unique bobblehead!”

Roxanne graduated from college on May 15 with a major in biology and a minor in psychology; in August, she will head to the Pennsylvania College of Optometry to pursue her dream of becoming an optometrist. Although she receives more credit for her piccolo playing, Roxanne is also an avid bassoonist, and she says that she “loved every second” of her four year tenure as a Villanova band member.

Of the moment that made her famous, Roxanne explains, “It was heartbreaking to see the team disappointed, and it was heartbreaking to realize my pep band days were officially over. I loved cheering for the Wildcats throughout my four years and really invested myself this season as a senior. I’ve made great memories at Villanova, and I consider myself very lucky to have had so many incredible experiences.”

The first 250 Kickstarter Backers will receive the bobblehead at a discounted price of only $15 plus shipping, with the price increasing to $20 for subsequent Backers. The Kickstarter Campaign is the only way to guarantee a bobblehead.