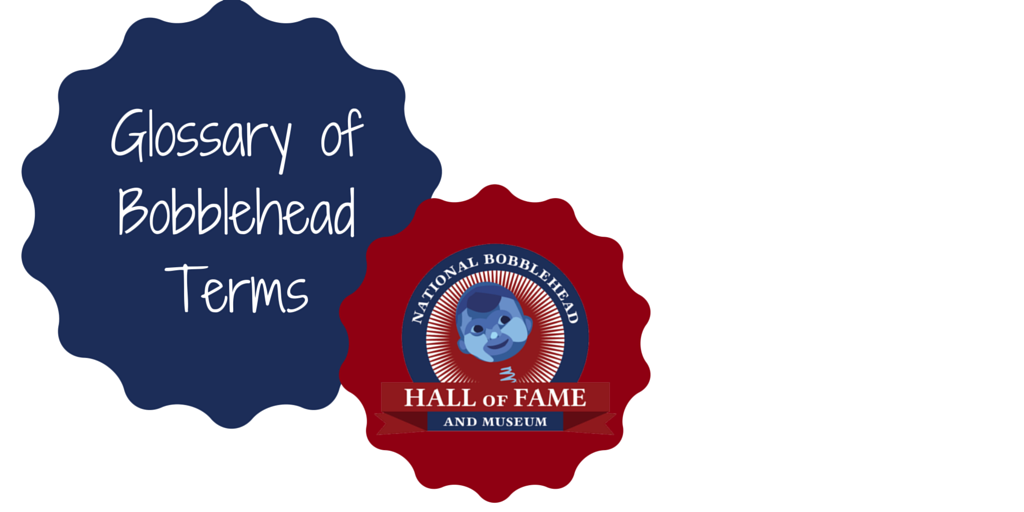 The most comprehensive Glossary of bobblehead terms, abbreviations and, acronyms on the internet. Links that are available will lead to another section of this page or open in a new window.

B
BDA - Branded merchandise company headquarted in Woodinville, Washington that is a major producer of bobbleheads primarily for promotions.
Bensussen Deutsch & Associates - See BDA
Bobbie Enterprises, Inc. - Company that was headquartered in Buffalo, New York and distributed the majority of Bobbleheads (aka Nodders) in the 1960's.
Bobblehead - A figurine in which the head is attached to the body using a spring. Collectors also refer to figurines with other "bobbling" parts such as arms and legs, as bobbleheads.
Bobble Head - See Bobblehead.
Bobblehead Addicts - A Facebook Group and website celebrating bobbleheads and providing a forum for discussion and trading of Bobbleheads.
Bobblehead Museum - National Bobblehead Hall of Fame and Museum or the Bobblehead Museum at Marlins Park in Miami, Florida.
Bosley Bobbers - Producer of primarily political and pop culture bobbleheads.

C
Case - A case of bobbleheads, which typically contains 6 for Forever Collectibles bobbleheads and between 12-48 for Stadium Giveaway bobbleheads.
Certificate of Authenticity - Also known as COA - A piece of paper that guarantees that an item (typically an autograph or variant) is genuine. Typically printed on a piece of paper that is provided to the buyer by the seller. Certificates of authenticity can be issued by the seller or a third party authentication service. The validity of the certificate of authenticity depends upon the integrity and knowledge of the seller or authentication service
CL - See Craigslist; Also short for Checklist
Craigslist - A global website providing classified listings which often include bobbleheads.
Custom - A bobblehead that has been altered to a different player, team or overall appearance.
Checklist - A list of bobbleheads in a particular series or given away by a particular team.

D
Dealer - A person who buys and sells collectibles professionally for a profit.
Doctored - A term used to describe a collectible, such as a bobblehead, that has been altered to cover up a flaw. A doctored bobblehead may have been changed from a generic version to a specific team without that information passed on to the buyer. Any collectible item that has been doctored is typically devalued, and this practice is frowned upon among the collecting community.

E
eBay - The World's Online Marketplace®, enabling trade on a local, national and international basis. With a diverse and passionate community of individuals and small businesses, eBay offers an online platform where millions of items are traded each day.
Error - A bobblehead that features a production error such as missing or incorrect decals. EX - Short for Excellent.
EX-MT - Short for Excellent - Mint

F
Facsimile Signature - Also known as Facsimile autograph. A stamped or printed reproduction of an autograph that might appear on a bobblehead.
FC - Fan Club. Bobbleheads are often included as part of a Fan Club or Kids' Club.
FOCO - See Forever Collectibles
Forever Collectibles - Company that has produced the majority of retail bobbleheads for major leagues since the early 2000's.
Funko - Company headquarted in Everett, Washington, which produces a wide variety of pop culture bobbleheads, Wacky Wobblers and other collectibles.

G
Giveaway - A bobblehead that was "given away" at an event.
Gold Glove Award - Annual Awards given my Major League Baseball to players who exhibited the best defense at given positions. Bobbleheads featuring Gold Glove Award winners have become common.
Green Bag - A a quarterly legal journal, supported in part by the George Mason University School of Law, dedicated to publishing "good writing" about the law. Since 2003, Green Bag has been producing highly sought after bobbleheads of Supreme Court Justices.

H
HeadKnockers - The term used by NECA for their line of bobbleheads.
HOF - Short for Hall Of Fame.

L
Limited edition - A term often used to indicate scarcity. A limited edition indicates that production of the bobblehead was limited to a certain number. However, that number may be large or small it.

P
Paper-Mâché - French for "chewed paper", is a composite material consisting of paper pieces or pulp, sometimes reinforced with textiles, bound with an adhesive, such as glue, starch, or wallpaper paste. Early bobbleheads were made of paper-mache.
Plastic - A material consisting of any of a wide range of synthetic or semi-synthetic organics that are malleable and can be molded into solid objects of diverse shapes and used to create bobbleheads beginning in the 1980's.
Polyresin - A resin compound generally used for statues, figurines, bobbleheads and decorative furniture. It is a sturdy material that can be intricately molded, allowing a great level of detail with consistent texture. Polyresin has been used for the manufacturing of most bobbleheads created in the 1990's through present day.
Price Guide - A list of estimated values for sports memorabilia.

S
SAM Inc - Short for Sports, Accessories & Memorabilia. A company that produced porcelain bobbleheads primarily of baseball players in the early 2000's. SAM Inc. also produced a few pop culture bobbleheads including The Three Stooges.
Series - A group of bobbleheads that are a part of a larger set.
Set - An entire run of bobbleheads from a given series.
SGA - Short for Stadium Giveaway. Promotional items, including bobbleheads, that are given away at a sporting event.

U
UD - Short for Upper Deck.
Upper Deck - A major sports card manufacturer that produced bobbleheads for a limited time in the 1990's.

V
VG -Short for Very Good, A term used in grading.
VG-EX - Short for Very Good -Excellent, A term used in grading.
Vintage - A term usually intended to indicate an item was issued or produced quite some time ago. Aged or of older origin. For example: a vintage 1962 Yankees bobblehead as opposed to a modern day 2012 Yankees bobblehead`. A piece of memorabilia manufactured about 25 or more years ago. Vintage, from the early days.

W
Wacky Wobbler - Trademarked term coined by Funko for bobbleheads that they produce.