This bobblehead is turning out to be one of the hottest bobbleheads of the year, with only 1,000 given away at Fenway.

According to the article at Bleacher Report, "Boston police officer Steve Horgan became an icon during last year's MLB postseason, and now, the Red Sox have immortalized him with a bobblehead.

Last October, bullpen cop Horgan threw his arms in the air when David Ortiz tied Game 2 of the American League Championship Series against the Detroit Tigers with an eighth-inning grand slam.

The Red Sox won the game 6-5 and eventually won the series in six games before going on to win the World Series.

Horgan throwing his arms in the air while Tigers outfielder Torii Hunter flipped over the outfield wall became an iconic image. Now, that moment will live on forever in the form of a bobblehead.

The Red Sox gave away 1,000 bullpen cop bobbleheads Monday, which happened to be Law Enforcement Night at Fenway Park.

Watch Geddy Lee (and little-Lee) from Rush do the ice bucket challenge!

According to StarTrek.com, "Entertainment Earth is aiming to entertain Star Trek fans with an upcoming array of Trek bobble products from Bif Bang Pow! There are actually five new products due out in September, starting with a Star Trek: The Original Series Enterprise Monitor Mate Bobble Ship, with the Enterprise NCC-1701 measuring approximately 2 5/8-inches…
Read more 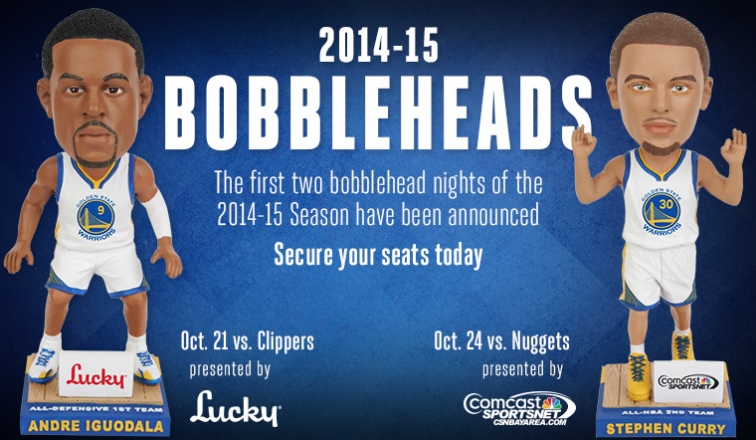 The Golden State Warriors will be giving away two bobbleheads during their eight game preseason schedule. Click here for more information.